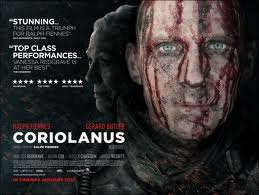 pearian quotes, but I’ll leave that to people better positioned to do so.  I have to give credit to Ralph Fiennes, there would be far easier projects to use as a directorial debut than Shakespeare and even other of the bard’s work which would lend itself to a first timer, but he pulled it off.

So what is it about? Essentially it is about a less than popular patrician general who even though is crowned in battle glory is hated by many of the people. This does not particularly bother him as he views the vulgar populous as rabble and to say he has any affection or love for them would be lies. The Rome of this setting is a dystrophic place where the good general is well employed keeping the masses in their place, when not in foreign fields adding to the city’s “glory”.

There is a certain brutality to his moral stance and unique honesty.  His mother the family matriarch (played fantastically by Vanessa Redgrave), wife and family friends as well as obsequious fellow patricians and senators propel him to Consulship of the city but some of those tribunes who are not under his spell and realise that it is the people to whom they must turn for power plot his removal and banishment.  Dejected and feeling betrayed he  goes into exile and, judging by his hair growth, after an Homeric odyssey finds himself in front of his arch enemy, Aufidius, leader of the Volscian forces (played by Gerard Butler), who over the course of his, Coriolanus’, thrice times six battles, has fought him hand to hand five times and been bettered by Coriolanus each time. They join forces and march on Rome. Entreaties by former comrades and  his mentor Merenius (played by Brian Cox) come to nothing. Eventually his, mother, wife and son go to him and after much anguish he agrees a peace. The treaty signing reminded me of the counterpart scene in Brannagh’s Henry V (1989). Aufidius, jealous of Coriolanus’ popularity among his Volscian troops renders on to him a death best delivered on the ides of March – sorry I couldn’t resist.

Why does Coriolanus work as a Shakespearian interpretation and as a piece of cinema? Well probably because Fiennes, having played the part over 10 years ago, knew what he was getting into. He also partnered with people who knew what they were doing. He and his co-writer, John Logan, managed to cut back the wording of Shakespeare’s second longest play to a time manageable for modern cinema without losing the  value of the play.

Barry Ackroyd’s photography also captures the violent essence and rather smartly allows a movie, shot on a budget to appear far larger than it was. The detail of the settings and props is flawless and use of handheld cameras adds to the starkness of the play. This is not a nice sanitised rendition of one of the bard’s harder works but a full spirited delivery by people who believe in the strength of the work.

The cast is brilliantly picked with performances which I would not have expected from some and typical of others.  I generally try to get some Shakespeare each year in Edinburgh as part of the Fringe festival, the interpretations range from fresh to agonising, it will be interesting to see how many people think they can add their vision to this classic next year. The Royal Mile could be an interesting place!