Okay, so there is baggage with this movie, but leave the baggage at the door and go watch a couple of great performances.  I often have a hard time watching Meryl Streep in roles as I usually just see her as Meryl Streep playing a character; here however I saw a portrayal o 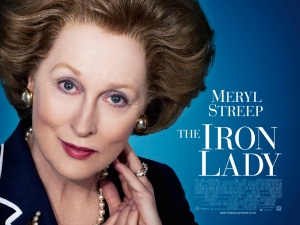 f a character and I was watching that character. Jim Broadbent as Denis Thatcher adds to the strength of the offering. Watching Broadbent reminded me of his role in Iris (Richard Eyre, 2001). There are many similarities to both movies. Great minds suffering from a mental decline and old age which contrasts with their achievements in earlier life. Now both are totally dependent on others.

The Movie opens with the “Iron Lady” shuffling about unrecognised (or ignored) is a small corner store buying milk.  Later we see one of her (heavily armed) security officers getting a dressing down by her nurse for letting her out of the building; this is typical of the subtlety of the movie which get the offering across.

Divorcing ourselves from the history many of us grew up with, we see an elderly woman missing her dead husband and taking cues from many ordinary life events to  return to a safer, warmer world with her dear husband beside her.  Like Citizen Kane there is a narrative of flashback and like Kane they are not chronological or meant as historical lessons but rather her view looking back at memories.

In this movie we see how a woman, once perhaps the most powerful women in the world, is now a virtual prisoner in her own home and perhaps her own mind. What we have here is a study of how power is taken away but the way in which that power affects the person continues.  Is she suffering from dementia or simply surrendering back into her memories and living in a time past.

Streep deserves to be recognised for her efforts here. Like Clooney in The Descendants (see blog entry) she is the central plank of the movie and if she fails, the movie fails, She did not fail. This is not a historical biopic, the historic events within which Mrs. Thatcher had a role are viewed through the prompts which are about the house or arise through conversations, this is about here now, not then. Another aspect of the film is of course the flashbacks, again they work. W.E. is an example of where this does not work, clashing and jarring with the narrative (poor as it was in the first place). I mentioned Iris earlier and there, like The Iron Lady, the flashbacks give us another view to the narrative, adding to the overall story.

The weakness in the movie is the under use of the fantastic supporting cast, even though the temptation might be to over use supports like Richard E. Grant, John Session or Nick Dunning etc. the temptation was so strongly resisted it took away, perhaps, from what they could have added. That said if they had done so it might have been a completely different movie.  I still would have liked to have seen them used more.  If you are going to use prominent actors, you should be prepared to use then for more than wallpaper.