What happens when the truth turns out to be far removed from the legend? Jalmari Helander directs a seasonal comedy which turns the idea of cuddly Christmas Santa’s completely on its head. Co-written primarily with Jurso Helander, what we have here is a hugely imaginative and different view of Christmas and what goes with it. 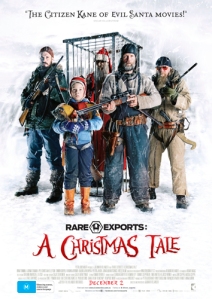 Life in a small hamlet in the north of Finland sitting on the border with Russia is simple and straight forward, with one of the main events of the year being the annual reindeer cull in the lead up to Christmas which gives the small community the financial stability they need for the year ahead, but something has gone wrong, all of the dear have been killed by something, it was thought wolves or bears which got through the border fence and came from Russia.

Does the archaeological dig taking place on the top of a mound/hill just inside the Russian border have anything to do it? Accepted always by the locals as a normal run-of-the-mill hill it is described by those on the mound as a burial mound, a great prison as it were.

As the locals gear up for the annual deer cull they quickly realise that the surrounding country side is far more quiet than it should be.  After a quick search they find the deer dead by the fence to the mound.  Young Pietari (played brilliantly by Onni Tommila) begins to think he might be responsible and using what he has heard he quickly sets about learning more and soon realises that a possible cause and it is not nice. When local children also start to go missing and then personal belongings, like all of the heaters in the local homes, the pressure begins to mount and he struggles to get the adults to believe him. Pietari’s dreamy character is well placed against his pragmatic and grounded father.

As the movie unwinds, what presents itself is a small community taking events in to its own hands and discovering some quite shocking truths. The Characterisation is excellent, the script sparse but used to good effect in a landscape which is well tailored to the story. As the movie progresses the fantasy element takes over but the work never looses the run of itself.

I will stick my neck out here and predict that this movie will become a seasonal cult classic to be repeated annually. It is worth mentioning that the team behind RE have also created a virtual world to add to the experience of the movie and continues in the same humorous manner.

There is no point in walking through the plot, that would only ruin it, suffice it to say, it all works well, with some great scripting and a story-line that just moves you along with it.