Dirty Rotten Scoundrels (Frank Oz 1998) with attitude and guns and just as entertaining. Directed by Eric Basnard (writer Babylon AD, 2008) this is the story of a small group (possibly family) of con-artists who are working to avenge the death of our eponymous hero’s brother who was shot by hired killer on the orders of a villain the team was in the process of coning. 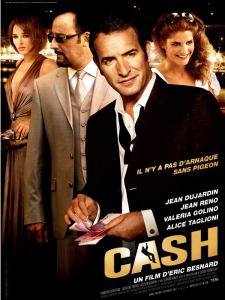 Jean Dujardin (The Artist 2012) is the lead character who goes about building up the links and scams to keep his team afloat. “François” the oldest member of the team – “papa” is played nicely by François Berléand (best known in English language cinema for his recurring role in the Transporter franchise as Inspector Tarconi). Together with the help of “Maxime” a shadowy underworld bank robber named Dubreuil (Jean Reno) and a very unorthodox police Lieutenant they pull together a gang to execute a daring diamond hoist from a South African who is funding his activities with conflict diamonds and at the same time get revenge for the death of Cash’s brother.

As Cash goes about trying to survive with a group of mercenaries hunting him, the police on his back and trying not to be too badly conned by other cons events quickly escalate to a life threatening pace, complicated by Europol looking for Maxime and thinking he, Cash, might be there man. Internal wrangling at Europol  add to Cash’s seemingly add to Cash’s difficulties.  Captain Barnes eventually puts the clues together and tightens in on his suspects.

There are more twists and turns in this movie than an Irish country road, but they just add to it.  I have one piece of advice for anyone watching this movie: do anything you have to do before the movie starts, turn off your phone and put a “gone fishing” sign on your front door. A lot happens in this movie as it progresses and in order to keep up to speed with what is happening you need to pay attention. This is possibly a weakness as perhaps at certain times there is too much happening and you can struggle to put the pieces together.  There are one or two areas which are a leap of faith but overall the production does not suffer too badly for these. Comedy is seen as a respected art form in France and as such an accepted aspect of French cinema.  What we have in Ca$h is a fine ensemble cast all able to play straight roles but in a manner which gives an overall well delivered performance. There is perhaps a little too much put into the movie in places and a little too much expected of the watcher at times, but when the final curtain falls you do sense the good guys won… but who are the good guys, and for that matter who were the bad guys? J

Rating 6/10 a good way to enjoy a couple of hours with out interruption.