Directed by Paulo Sorrentino. This small sentence explains a lot, more so when I say it was Sorrentino who directed Il Divo in 2008.  If th 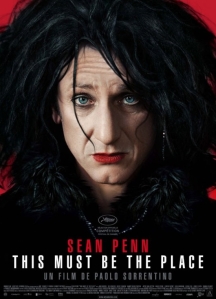 is movie has a failing is that you, or at least I did, spend time thinking of people like Terry Gilliam, Tim Burton and such like.  This is because Sorrentino’s work is up there with these greats.

Starting off in Dublin we see a bent over, glam rocker who we learn is a former star now living in Dublin in a sprawling mansion surrounded by his ever so eccentric wife (Frances McDormand, Burn After Reading, 2008)who despite being more than sufficiently wealthy actually works as a fire fighter.

The Support cast such as the young Goth (Mary Eve Hewson), her mother (Olwen Fouere, The Other Side OF Sleep, 2011) who seems to be suffering from the loss of a son and is comforted by Cheyenne. The cast in the American side is just as excellent.

One day Cheyenne receives a call, his father is dying. Rather than fly, he has a fear of flying, he takes a ship across to New York.  He arrived too late and his father is already dead.  Talking with his cousin, he is given his father’s diaries, they are actually notes he produced over the years as part of his search for a Nazi prison guard who humiliated him during the Holocaust.

Cheyenne, knows he is possibly depressed, his wife thinks he is bored, he thinks so too. With this in mind he sets off across America to find this man, and himself in the process.  David Byrne of Talking Heads fame makes a cameo as an old friend, thankfully with musical accompaniment. Judd Hirsh presents us with the character of Mordecai Midler a Nazi Hunter who is knew his father.

Umberto Contarello co-wrote the screen play with Sorrentino, it is quick smart and well placed. The screenplay is supported by nicely nuanced cinematography, subtle direction, random characters who would be at home in a Cohen Bros. film and finally a fantastic soundtrack. Leaving aside the Talking Heads/David Byrne contributions, of which there are many and which stand alone by themselves, there is also Nino Bruno and Gavin Friday’s contributions as well as excellent use of Arvo Pärt’s Spiegal Im Spiegal and Alex & Jonsi’s Happiness.  If there was a weakness to the movie, it was that the much of the soundtrack was too well known, that said it was not overpowering and added to the scenes rather than detracted from them.

Quirky, original, independent…weird… this is certainly well worth watching. Sean Penn is world class and shows again why he is one of the world’s most versatile actors , a total pleasure to watch, and a master-class in characterisation

9/10 – go watch it and then buy the soundtrack…and the DVD when it comes out!