This is a capable piece of entertainment, at times it perhaps attempts to be something greater than it is, but overall enter 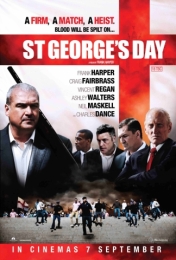 taining. Director by Frank Harper (This is England, 2006) who also co-wrote thje screenplay with  Urs Buehler  who up to now has been mainly technically involved in movie projects supporting camera and electrical work. Harper also stars in the production as Micky Mannock. Micky together with his cousin Ray Collishaw (Craig Fairbrass, London’s Burning, 1990). Craig wants to get out of the family business, His cousin Micky who runs the business with him agrees to buy him out.

This is where the trouble starts. Needing a sizeable amount of cash quickly Micky agrees to smuggle in a drugs load for the Netherlands.  This is where things go badly wrong. Firstly he is working with Russian Mafia who life up to all of the stereo types for violence. This is a fight on the boat over – the boat is capsized in a storm and the Russian on board is shot.

As a result of this, the Russians want vengeance for their man, along with their £20 million; this would be troublesome enough except for the fact that they also have the police after them in the guise of two of Scotland Yard’s finest Inspector Nixon (Jamie Foreman, Layer Cake, 2004) and his subordinate, Proctor (Sean Pertwee (Dog Soldiers, 2002).

This all leads to a spot of bother where the two cousins need to raise the necessary cash and try also guarantee their safety. In order to buy themselves some time they engage the services of Trenchard, (Charles Dance (Michael Collins, 1996), a London underworld kingpin who is in a position to negotiate a truce and make arrangements for the cousins to pay back the money.

Paying back the money is the problem, but crime partner Albert Ball (Vincent Regan, Troy, 2004) who arranged the original shipment and is based in Amsterdam knows of a blood diamond smuggling route via one of the carriers.  Working with the cousins they begin to formulate a plan for the diamonds.

In order to get the diamonds they piggy back to Europe with other family members and friends who happen to be football hooligans on their way to a match in Europe for an organised fight at it’s fringes.

Using the fight as cover they hatch a plan to rob the diamonds and get out of trouble.  The Russians and the police close behind them thanks to an informer add more pressure than is needed. What unravels is a decent crime caper with a well-populated supporting cast. It perhaps looks to its background alongside movies as The Football Factory etc. but perhaps it also has pretensions to classics such as The Long Good Friday (John MacKenzie, 1980), it falls short here. It should be said in their defence; TLGF is a very high target to aim for.

The many twists have a feel of Deus ex-machina after a while, where one wonders if they are used to strengthen plot weaknesses.

Rating 6/10 an entertaining yarn which should keep gangster and underworld movie fans happy. All of the clichés are here and the movie very much panders to the jack-the-lad London image of rough diamond jingoism masking as patriotism.

Life At 24 Frames Per Second