The House on Pine Street.

Directed by Aaron and Austin Keeling (more known for their short movies) An interesting idea which ultimately lets itself down by giving us too much and tool little at the same time, creating a movie which is a mixed bag of everything.  A young couple recov 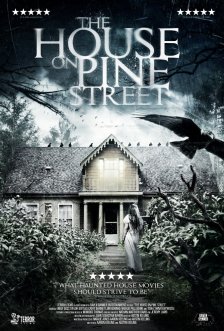 ering from issues which reveal themselves as the movie goes on, move in to a house in a sleepy Kansas sub-urban town.  Here immediately the film falls for its biggest weakness, cliché; as the couple is introduced to us arriving at the home, the host/estate agent is the type of mono-syllabic character Which makes Lurch (Adams Family 1964) seem carefree and reckless, as it turns out he was a red-herring, appearing nowhere else for the film.

We find out that Jennifer (Emily Goss) is 7 months pregnant and has agreed to move back to her home town with her partner while he takes a temporary job locally. Straight away the scene is being set as we see the house deliberately set to look suitably old and scary. Which is fine except, one room is perfect and nicely restored, while the hallway etc. has bubbling peeling paint.   Nothing much happens at first, then little things start to happen, but only as long as we the watcher sees them. As the house continues to make its presence felt, the stresses build up for Jennifer.  Stresses which are not helped by her over-bearing mother. It turns out her mother arranged the house and job, despite the two of them barely being on speaking terms.  As Jennifer is drawn deeper in to the horror of the house, the others (including some local friends of her mother) are more and more inclined to believe it is Jennifer, and not the house which is the issue.  It also does not help, that as her hate of the house and her surroundings grows, her husband (Taylor Bottles), is settling in to town and has accepted a full-time position.

This could have been an excellent movie, but there was nothing new in the offering, if the writers had decided not to actually show the entity, it might have been a better movie, as it would have kept the mental terror whole.  The tension between Jennifer and her mother (Cathy Barnett) is perhaps a little too much given the already occupied story-line. Somewhat cluttered in its presentation, leaving the viewer to try and catch-up a number of times, it could have tried to do its own thing.

The film builds to its ultimate end, not a million miles from expected and so not reaching too high an achievement. The Taking of Deboragh Logan (Adam Robitel, 2014) was a much better piece of work. Over all a familiar take of a familiar story, which could have been much more interesting.