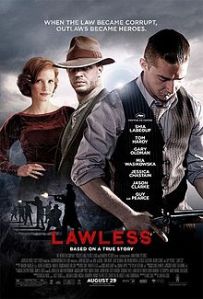 n in slow tedium, it brings you along with the story and keeps you always wanting to see how a particular scene works out. I was happy to see it was based on a book (The Wettest County in the World, Matt Bondurant), which might be worth buying. Nick Cave (The Proposition, 2005) wrote the screenplay.

I mention The Proposition because the Director on that project was John Hillcoat (The Road, 2009), who ofcourse directed this offering. Set in Franklin County, Virginia during the prohibition years of the Great Depression it tracks the lives of the Bondurant brothers who apart from running a diner and garage just outside town also are some of the leading moonshiners in the county. The brothers are led by the quiet and cautious brother Forrest,(Tom Hardy, The Dark Knight Rises, Bane See below) who despite his calm demeanour is more than capable of swift well aimed violence. The middle brother , Howard (Texas Killing Fields, 2011) and of course the youngest of the clan, Jack (Shia LaBeouf Transformers, 2007) who as with all in his position wants to grow up fast and show the world that he is as good as the rest of the family.

The problems start when the Attorney General for the Commonwealth of Virginia bring a new Special Deputy down from Chicago, Special Deputy Charlie Rakes (Guy Pearce, Lockout 2012)brought in Commonwealth’s Attorney. Fighting an honest lawman is one thing, or living with the local police who know when not to take action is manageable, but Rakes is a crocked as the rest and more vicious than most. Forrest has built up a business by being careful and steady while younger brother Jack is headstrong and eager to succeed.

This of course causes some tensions with Forrest having to clean-up after Jack more than once. Jack however manages to do business with the Chicago mafia, represented by a very under used Gary Oldman (Dead Fish, 2005), if I have one complaint is it the use of Mr. Oldman. His role is essentially a glorified cameo and although it works, I suspect he presence on set had a lot to do with box-office pull.

The movie progresses through a few short years as the brothers battle the police, other boot-legers and themselves until the final showdown. This comes quickly when it comes and is done well.

I mentioned the movie is understated, don’t mistake that for “slow” it is not a slow film, it is a steadily moving story which brings you along with the characters as the story moves along.

This is a good old fashioned prohibition era gangster movie, Mr. Gagney would have worked well here. The cinematography works well with the director using the natural cycles of the surrounding countryside to mark the passing of time.  The use of various signs and props also allows us to almost get a feeling of normality as life goes by.

We’ve learned from all too many examples that the first of the franchise was the best of the set,

with the sequels being poor imitations of feeble attempts to regain the position of the first. This has not been the case. Although I thought the second of the three to be Christopher Nolan’s (Inception, 2010) best, this is still a good movie. There were some raised eyebrows when Nolan announced he was hanging up his lenses in relation to the Batman movies, at the time I was also surprised, but after seeing the movie, I can see his point.  Rather than the franchise going on mindlessly he has chosen to build a character, or indeed a set of them, with a fixed story arc over the three movies.  The reappearance of so many characters through the movies shows the strength of linkage between each movie, these were more a series than a franchise.

This was a closing movie; a number of plot threads were closed and neatly dealt with, while some new ones were introduced, more on that later.  Although it is Nolan’s last offering here I don’t think it is the end of Batman…and Robin.  There have been some criticisms that somebody coming fresh to the movie would not fully understand some of the plot elements and characters.  Possibly but it is  bit like the Bourne franchise.  I had not seen the first when I saw the second.  I then went out and bought the first for all of the parts to fit together. If you by a book you do not start at chapter 8, likewise if you are going to watch a franchise movie, see the earlier offerings first to know what you are watching….

Christian Bale (The Flowers of War, Yimou Zhang, 2012)is the brooding billionaire drawn back to the role of Batman, I say “brooding” more like sulking in places, but as ever his character manages to work. Michael Caine (Harry Brown, 2009) was as ever the paternal Alfred always having a wise and careful word of advice.  Doubling with Cane was Morgan Freeman (Red 2010) who also co-paternally looked after Wayne’s interests, but this time from the technology side, again he manages to pull a few gadgets out of the armoury without ever giving us the impression he was a re-imagined “Q”. Marion Cotillard (Big Fish, 2003) as Mirranda Tate added a nice touch of class. Tom Hardy (This means War, 2012) played the necessary bad guy.  What is interesting here was that it took me some time to recognise him.  The acting was stunted, as the character possibly needed, but you have to hand it to Hardy for his ability to constantly change his physical appearance. Anne Hathaway (The Devil Wears Prada, 2006) has certainly matured and was exactly what we expected as Catwoman, not all bad, with tough of a good streak to win us over. Some of the supporting cast like Nestor Cabonell (Lost 2007-2010) and Matthew Modine (The Browning Version, 1994) I felt did not quite work. That said Cillian Murphy (In Time, 2011) back as Dr Jonathan Crane, gave a performance which reminded me of the beggars’ court in Fritz Lang’s (The Blue Gardenia, 1953) “M” (1931). This was one of the few parts where the dystophic atmosphere  created by Nolan actually worked.  The use of Joseph Gordon-Levitt (50/50, 2011) was certainly a bright part. That said is appearance and possible development became obvious very quickly, sadly it took to the closing scenes to confirm what we thought, and so the possible re-launch of the franchise. I can’t not mention Gary Odlman (Tinker Tailor Soldier Spy, 2011) as Commissioner Gordon who delivered the fighting character we’ve come to expect, a far improvement on the original quasi-comedic characterisation.

The plot is if course; bad guy tries to take over and/or destroy Gotham and Batman has to save the day…all fairly standard really. Overall a good piece of entertainment, even if it did sag a little just past the middle. It will be interesting to see how the Batman and Robin story develops. All in all not a bad effort; not a perfect film, long in places but well worth watching