Written and directed by Patrick Brice (Creep, 2014). This is a perfectly fine piece of entertainment. I say this because given the subject matter and story line it could have been made a number of ways, from a Woody Allen 1970’s angst ridden social farce or a glorified soft-porn TV movie.  Instead Brice manages to pull off an exploration of the fears  and weaknesses. 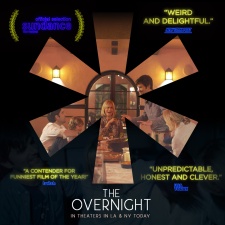 Alex (Adam Scott, Krampus, 2015) and Emily (Taylor Schilling, Argo 2015), together with their young son RJ are new to LA and don’t know many people. Against this they meet Kurt (Jason Schwartzman, Fantastic Mr. Fox, 2009) an extroverted Los Angelino while at the part with their son RJ, Kurt is there also with his son. After a short conversation (which leaves Alex and Emily scratching their heads) they are invited to dinner with Kurt and his wife Charlotte. Dinner starts off normal enough with Alex and Emily learning that Charlotte is an actress. They later see some of Charlotte’s “work” as they get to know their new friends better during the night.

Indeed as the night progresses we are exposed to the extroverted confidence of Kurt and Charlotte, which ultimately  reaches the point where Kurt decides they should all take a plunge in the pool outside, obviously the hosts are all for it, while our more reserved guests are somewhat shy about doing so nude. A reservation “justified” by the large size of Kurt’s manhood, compared to Alex’s. We can see the tension between everybody, Alex is not too comfortable with the events of the night while Charlotte is more open to allowing events unwind as the night develops.

This leads to some tension, which Kurt seeks to remove by showing Alex his pool-house where Kurt practices his art (the majority of the paintings are of the female reproductive organ) and also his breast suction pump films which they make for the Scandinavian market.

As it turns out Kurt and Charlotte are not the perfect couple of their image, they have the same insecurities as the rest of us, but they do not want to accept these. While they all come from the point of not being happy with their lot in life, they begin to realise that what they have is not as bad as they thought it was.

On the down side the camera work resembles that of a cheap made for TV movie that does not inspire the casual viewer to sit down and watch the movie, the dialogue is a little stained in places but overall it works.

This is a safe 3*** movie with no pretensions of greater.