First off, this is a smarter than average piece of Sci-fi.  As I’ve mentioned before, there are some movies I will see purely for their pedigree, even before I know the plot, Looper was one those movies.  Written and directed by Rian Johnson (Brick, 2005) it also stars Joseph Godon-Levitt who also took the lead  in the same neo-noir classic.  Throw in Bruce Willis for s 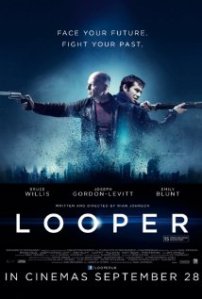 In statistics two does not usually make a trend, but in cinema it might just.  This is the second major movie this year where the lead characters are the same person but from different times. We saw this first in Men In Black III (Barry Sonnenfeld, 2012, see below) In tha movie our heroes went back in time to affect the future. The comic nature of the movie allowed Josh Brolin to do an excellent impersonation of Tommy Lee Jones’ character “K”. With Looper we do not have an established character such as “K”, so we could not as readily pick up on the mannerisms and peculiarities of the character, the physical characteristics had to be the key.

Now any of you old enough to remember Moonlighting (1985) will remember know that J G-L is not a dead ringer for the younger Bruce Willis. However some neat special effects and make up gave us two actors playing the same character, check the eyebrow movements and even the shape of the nose.  I have to say the altered JG-L took a little getting used to , especially since Premium Rush (See Below) is so fresh.

All that aside the story revolves around a young man who has become a “Looper”, essentially a mafia hit man with a difference.  In the future time travel is perfected and quickly outlawed.  However other advances in biometrics also mean that the killing and dumping of victims has become almost impossible. As a result the mafia in the future employs the illegal time travel, all one way in to the past and sends one of its top men, Abe, (Jeff Daniels, The Lookout, 2007 – also staring Joseph Gordon Levitt) back to the “present” of the story and has him set up his own crime organisation.  Daniels and Gordon Levitt are two very versatile actors not afraid to stretch their range and always know just how far to stretch. There is a cold danger to the Character of Abe which comes across nicely.  As part of this he hires a team of young men to act as Loopers. They go to a certain place at a certain time and the victim appears, they quickly shoot them, take the payment silver bars attached to the body and then dispose of the body. All very neat and tidy.  Earning all concerned an nice living (with the exception of the now dead victim). Life is good until Loopers start getting paid off by their future bosses. The nature of the pay-off is the issue of concern, They unknowingly kill their future selves; the problem is that when their victims appear they are hooded and in straight-jackets facing away from their executioner.  But things go wrong, one survives and people find out what is happening – they get paid off in gold and know they have about 30 years of life left.

With our main characters this goes spectacularly wrong, future Joe, survives, manages to convince present Joe of the issue and while both are being hunted by the mafia, Noah Sagan (you guessed it…Brick) is a hapless mob lieutenant not in good favour with Abe who takes the hunt for Joe extremely seriously and eventually captures him and takes him to Abe, with deadly results for most concerned. Meanwhile older Joe is hunting down the person,  who in the future will be the crime king-pin who has the loopers killed.  Joe Junior goes to one of the addresses, which turns out to be the one. A lone mother, (Emily Blunt, The Adjustment Bureau, 2011), who as it turns out is protecting a very gifted child in an isolated farm.  Ultimately the battle culminates in this isolated farm…

This movie is based on very philosophical science, and I thought I noticed the soundtrack (at least twice) sounding very Whovian at the point where the  time travel occurred . They successfully managed to convey the plot while carefully avoiding all of the science but keeping within the rules of time travel as understood (I’m sad enough to principles of the science involved). This is good solid entertainment.  It slows a little in the middle but picks up again building to the climax.

Entertainment from a cast largely used to working together and it shows.