If ever there was a film which was the victim of its own hype Prometheus, was probably it. Many have slated it. I have to say, I think 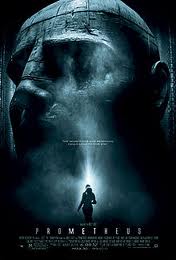 unfairly. Okay so we expect great things from thoroughbreds out of leading stables and let’s face it, the blood-line for Prometheus is as good as it gets and the stable is one of the best in the world so perhaps there was a certain justifiable expectation.  I’m going to forget about all of that and think about what I saw. Some good old fashioned Sci-fi.

The movie’s opening credits are essentially a fly over of what seems like the Icelandic interior (I was almost booking another flight back!) then move to Scotland about 70 years into the future and the discovery of the rock drawings by two of our heroes, the good doctor Shaw (Noomi Rapace, Lispbeth Salander, The Girl with the Dragon Tatoo, 2009) and Logan Marshall Green (24, 2005) as Doctor Charlie Halloway.  From here we go to the Prometheus  a couple of years into the future.  I have to say this was where my first upset kicked in.  The distance from earth given for the craft is physically impossible in the time scale given, it would have needed to have moved many times faster than light. No indication was given that this could be achieved, but this is another story.  As with any long-distance Hollywood space travel our crew are all in stasis until the ships reaches its destination.

We see Michael Fassbender’s (Haywire, 2010) robotic David looking after things, touring the ship,  with a photography style reminiscent of those early shots in Moon (Duncan Jones, 2009) and indeed you eventually begin to get the old Alien (1979 Ridley Scott)  feel to the ship.

The plot line is convenient at best. No sooner is the team at the planet than they find the sites to investigate. It also seems that Scott has some unanswered personal questions regarding God, the universe, creation and intelligent design, the questions are asked, but never fully answered, which works for me as a summer movie is not the place to answer such.

From the perspective of individual acting, it was by and large excellent, Sean Harris  (Stretch in Harry Brown, 2009) though I do have to ask if Charlize Theron was value for money, she does not seem to have been best used.

What does standout is the visuals, the graphics and CGI, this is first class and add to the movie substantially. The rating I’m giving below is in relation to the theatrical version which I watched, when the director’s cut comes out I expect significant change as with other Scott movies which received the same treatment.

At the end of the day, I was wanting to dig-up the DVD of the original Alien.