I’ve been thinking about how to open this one, would l describe the film as a “coming of age” movie or one about a boy forming a band to impress a girl. It is those but not specifically, and to simply describe the film as one or the other of them would be to do it an injustice.  John Carney (Once, 2007) gives us a movie about identity, who we are, who we think we are and who we dream of being. It is 1985 and our young  hero Conor is going through some changes, though not ones of his liking or making.  Coming from a middle class background, the family is in financial trouble, due to work drying up for the parents and sacrifices have to be made. One of those sacrifices is Conor’s schooling as he is taken from a private school and dropped in Sing Street Christian Brothers School (a public school). 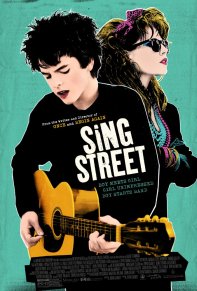 Here we have the middle class boy, with his middle class background suddenly in the working class school, without even the correct colour shoes. This brings him into contact with Br. Baxter (Don Waverly (Ondine, 2009) The Christian Brother with a not very Christian attitude. Another who is not who he seems. Br. Baxter becomes Conor’s nemesis, as they struggle over shoe colours, hair dye and make-up. To its credit, Carney manages to avoid dropping the movie into the quagmire of sexual scandal, though hints at it, the Christian Brothers were not going to escape completely from the sins of their past.

Against all of these struggles in life Conor, practically on his first day in school, noticed a girl, Raphine (Lucy Boynton, Ballet Shoes, 2007) sitting nearby on her doorstep, he immediately falls for her. And as with many lads of his age, he immediately begins to woe her. She’s out of his league, so in an attempt to impress he first repeats some musical trivia his older brother, Brendan (Jack Reynor, Glassland, 2014) shared only the night before and then announces he has a band and would she like to be involved. Indeed Brendan, with his own issues, still manages to ensure Conor has all the brotherly advice needed to get through life and get the girl of his dreams.

What follows is a quest by Conor to quickly find a group of guys he can call a band.  He actually manages to do this without any major issue. Indeed the band aspect of the film is straight forward and of no major issue. As part of his band, Conor  tells her, they are going to make a video, if she , the model she claims to be (almost…)would like to be in it. She reluctantly agrees to give the video some weight by appearing in it. What follows is a group of young boys trying to pull together a mid-80s new wave music video, with all the situational gags possible. Mark McKenna, Ben Carolan and Percy Chamburuka, all deserve mention as his fellow band members.

And so through the usual trial the boys manage to get it together enough to film the video, which is pure new-waveish, 1980’s punk-rock. All of this initial band success is against a personal background that sees the family split up as their parents are separating and the children are being dispatched to a new apartment with their farther (Aiden Gillen, Calvary 2014), While his mother ( Maria Doyle-Kennedy (Jupiter Ascending, 2014) moves in with her new boyfriend no one is happy about that arrangement. Away from his music, he turns to his older brother for advice on everything from relationships, music to life in general.  We go on to learn how his would-be model girlfriend is a lot more fragile than made out to be.

In school the band decides to play in a school event coming up, this provides the scene for their first public performance and also a chance to make a statement of rebellion against Br. Baxter and the school.  Another of those people who is not who or what they seem is the school bully, Barry, played by Ian Kenny who is from a hard home and a life of domestic violence, however when it comes to being the tough-guy in school, young Barry is good at scaring people, but not very good at seeing threats through and Conor notices this, ultimately asking Barry to be their roadie, something he happily agrees to, he has a purpose.

As this quest for identity and discovery develops it does so against the social backdrop of 80s Ireland and emigration.  Conor slowly realises his only hope for happiness is to leave his home, Dublin and Ireland and head to  London (with nothing). Supporting Raphine through her own struggles, they embark together for London with the help of his Brother, using his late-grandfather’s boat…